There are four types of fillet and two types of Chamfer, that you can generate in sketching. these types are listed below and In this tutorial we will go through each one by one.

There are some points that are needed to be remembered:

Difference between normal and trim option

In normal option either for chamfer or for fillet, construction lines are created between entities. These lines can be used as reference for further sketching or modification. While in trimmed option everything gets removed and no construction lines are generated. The difference can be seen below in normal and trimmed option for fillet or for chamfer.

Steps for Fillet and Chamfer

you need to open new Sketch file in Creo Parametric and create a Square or a Rectangle in sketching window. For practice we only need two lines and for simplicity those lines are at right angle to each and intersecting.
After this click on fillet / chamfer icon and choose the option (normal /trim) you want to use.

After selection of desired feature (chamfer or fillet + normal/ trim) it will ask you to select the lines in between you want to create feature. First select one line and then select other. In following figure lines are labeled as 1, 2. The point on the line at which you will make a click, will be the start /end points of your feature. You don’t need to worry as the dimensions can be changed after creating it. 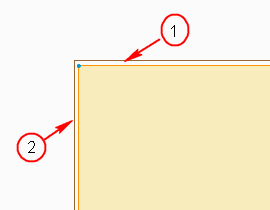 To make circular fillet first select the circular fillet option and click on first line and second line to generate it. This step is explained earlier. Your fillet will look like as shown in following figure. Please note the dotted lines appearing after circular fillet. They are actually construction lines. 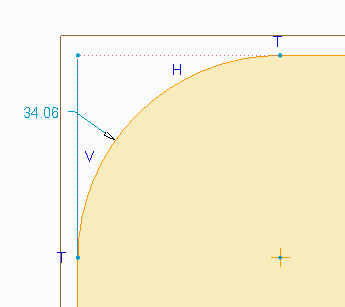 The steps of circular trim are the same as they are for circular fillet. The only difference comes out about the usage of trimmed sketch. 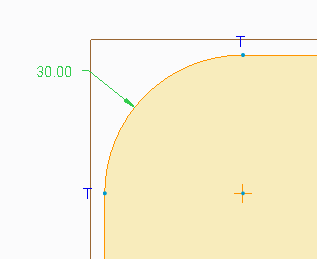 As ellipse has one major and one minor axis so this type of fillet gives an option to move more on one side than other. The procedure is same as previous. All you need to select the two lines. 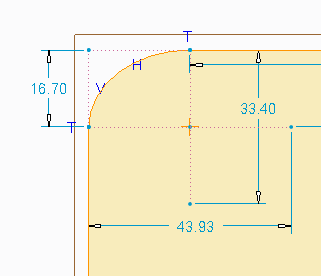 This type of fillet actually has been explained earlier in circular trim and Elliptical filet combined. Procedure is same as it was for Elliptical fillet and theory of trim remain same. 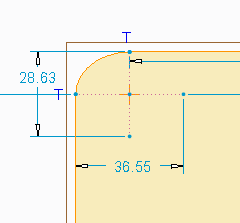 The procedure of creating chamfer is same as explained for fillet. Just select the desired option of chamfer then select the two lines and rest of thing will done by creo Parametric. Normal chamfer (left side) and trimmed chamfer (right side) are shown in the following figure.