It is a system consisting of finely divided fluid or solid particles of dispersed in and which are surrounded by gas. In recent years aerosols have become well known products discharged from spray dispensers, and the term aerosol has, in popular speech also come to means the dispenser itself i.e. a pressurized container made of metal or glass and provided with a discharge valve, which may be a spray valve or a foam valve. It is filled with the product to be sprayed and the propellant gas under pressure.

The aerosol can was invented in 1926 by Erik Rotheim. He invented the first aerosol can and valve that could hold and dispense products and propellant systems. This was the forerunner of the modern aerosol can and valve. The patent was sold to a US company for 100,000 Norwegian kroners, but it wasn’t until 1941 that it was first put to good use by Americans Lyle Goodhue and William Sullivan. They turned it into an instrument for the US military to fight the malaria mosquito in the Pacific during World War II. Aerosol spray products have three major parts; the can, the valve and the actuator or button.

The term aerosol derives from the fact that matter floating in air is a suspension i.e. a mixture in which solid or liquid or combined solid-liquid particles are suspended in a fluid. To differentiate suspensions from true solutions, the term sol evolved originally meant to cover dispersions of tiny particles in a liquid. With studies of dispersions in air, the term aerosol evolved and now embraces liquid droplets, solid particles, and combinations of these. An aerosol may come from sources as various as a volcano or an aerosol can. 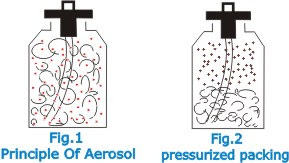 The product to be dispersed as an aerosol may have the liquefied propellant mixed with it in the form of a solution (Fig.1). Alternatively, the propellant may be present as a separate gaseous phase in the dispenser, in which it does not mingle with the product (two-phase system: Fig.2).

An example of the first type is afforded by hair spray. The spray or lacquer, usually dissolved in alcohol, is completely miscible with the liquefied propellant. When the valve button on the dispenser is pressed, the propellant vaporizes immediately, and its pressure forces the liquid out of the nozzle. The liquid i.e., the lacquer solution is discharged as a fine mist. The most commonly employed propellants are chlorinated hydrocarbons, butane, propane, isobutane, vinyl chloride and nitrogen. Nitrogen is used particularly for products that on no account be contaminated in flavor or smell e.g., toothpaste packaged in aerosol dispensers.

Aerosol toothpaste is an example of the second category of aerosol systems particularly, the two-phase system in which the propellant gas forms a separate layer over the product to be discharged. The dispenser is half milled with nitrogen or some other suitable gas and half with the product. The pressure in the dispenser is about 6 to 8 atm. (90 to 120 lb. /in2). Nitrogen can also be used as the propellant for foods packaged in aerosol form e.g., cheese spreads, malt extracts, vitamin preparations, syrups, pudding sauces, whipped cream.

Filling an aerosol dispenser at the factory is a simple operation (Fig.3: stages 1 to 5). First the product is introduced into the dispenser. This is done by a pneumatic filling machine. Then the aerosol valve is placed on the dispenser. In the next stage the valve is force-fitted under high pressure into the neck of the dispenser, so that a strong gastight seal is formed between the latter and the valve unit. The propellant gas is now forced into the dispenser. Finally, the dispenser is immersed in water to test it for possible leakage, which is manifested by escaping bubbles of gas. 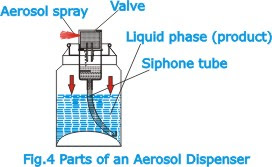 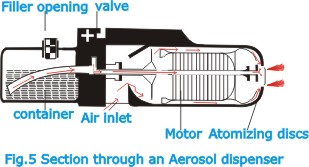 To make the aerosol mist flow in the desired direction, a second air stream is needed. A turbine is installed behind the motor sucks in air, which flows along the motor and emerges from the annular aperture around the atomizing discs. This stream of air carries along the aerosol particles of disinfectant (Fig.5).