Skip to content
The properties of airflow mainly depends upon
1)       The profile of the airfoil section and on
2)       The occurrences occurring at the boundary layer, it is basically a thin layer of air attached to a solid surface e.g.  We have an airfoil and the air is flowing over it, and which is distinguished from the main airflow by distinctive flow characteristics of its own set up by friction. The flow in the boundary layer where the thickness of the layer is shown greatly exaggerated may be laminar or turbulent. In laminar flow the velocity distribution in the layer shows a steady increase from zero at the surface of the airfoil: more particularly, the wing of an aircraft: to a maximum corresponding to the velocity of the main airflow. 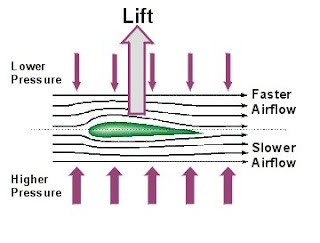 An airfoil is a instrument which gets a necessary reaction from air moving over its surface. When an airfoil moved in air or the air passed through over airfoil, it is capable of producing lift. Lift is the vertical force which the air exerts on the airfoil for e.g.: Wings, horizontal tail surfaces, vertical tails surfaces, and propellers. The flow is smooth and it always move in parallel layers; hence the term laminar. In turbulent flow, the fairly regular motion of the laminar boundary layer is destroyed. The boundary layer undergoes transition; it becomes thicker and is characterized by large random

motions (turbulence). This effect may give us the separation, separation imeans that the flow is detached from the surface. Hence it is named as separation of flow.

The airflow around the wing occurs at the stagnation point and is laminar up to the transition point, where turbulence sets in the latter point is located near the point of minimum pressure, approximately where the wing has its greatest thickness. Normally the turbulent boundary layer separates itself from the trailing edge of the wing, where eddies develop. If this separation occurs too far forward toward the leading edge, there is serious loss of lift and an increase in drag. 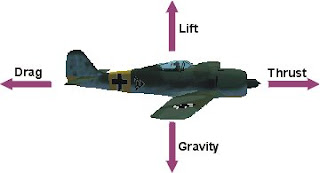 This is liable to happen when the angle of attack exceeds the critical value known as the stalling angle or when the airspeed becomes too low. Some aircraft, especially sports planes, are equipped with a stall-warning device which may consist of a short triangular plate or a length of wire fitted to the leading edge of the wing. When the angle of attack becomes dangerously large, separation of the airflow commences at this plate or wire. There is an immediate loss of lift, which warns the pilot that he is approaching the stalling angle.
Regions of the wing where laminar separation is liable to occur may be provided with device for producing turbulence. The resulting turbulent flow adheres better to the surface than the laminar flow and premature separation is thus prevented. Such devices may, for example, take the form of small projecting plates which break up the laminar flow. Swept wings are provided with so-called fences, which are plates or vanes placed parallel to the main airflow and prevent flow (and separation) in the direction from wing root to tip, this subsidiary flow being promoted by the sweep of the wing.
A similar effect is obtained by forming the leading edge of the wings with sawtooth notches. At the tail of the aircraft, interference of the boundary layers of the horizontal and the vertical stabilizers produces interference drag. To diminish this, the so-called T tail has been developed, in which the horizontal surfaces are placed at the top of the vertical fin, while the junction of these components is provided with a fairing i.e., a streamlined casting designed to reduce drag.
Steering an aircraft in three directions is effected by means of: the rudder, which guides the aircraft in the horizontal plane, the elevator, which controls the pitch i.e., makes the tail go up or down, and the ailerons which control the rolling motion of the aircraft by their differential rotation. The rudder is attached to a vertical stabilizer, while the ailerons are set at the trailing edges of the wings.