Thermodynamics is the science of energy, including energy storage and energy in transit. The Conservation of Energy Principle states that energy cannot be created or destroyed, but can only change its form. The three forms of energy storage of greatest interest to us arePotential Energy (PE), Kinetic Energy (KE), and Internal Energy (U), which we introduce below. The two forms of energy in transit that we consider are Work (W) and Heat (Q), and the interactions between these various forms of energy are defined in terms of the First Law of Thermodynamics, which i will  introduce later
Force and Work
We begin with Newton’s Second Law, as follows:

The Weight of a body is the force acting on that body due to the acceleration due to gravity (g = 9.807 [m/s2]), in accordance with the Universal Theory of Gravitation developed by Isaac Newton.
At this point we note that the major confusion of the English system of units came about because of the decision to define mass and force independently as 1 lb (pound), when in fact they are related through Newton’s Second Law. In order to justify this one has to separately define a pound mass (lbm) and a pound force (lbf), thus since the acceleration due to gravity g = 32.2 [ft/s2] we have:

One attempt to solve this paradox has been the introduction of a new unit of mass, the “slug”, thus:
1 slug = 32.2 lbm
We now consider the work done (W), the energy in transit requiring both the applied force (F) and movement (x). If the force (F) is constant over the distance moved (x) then the work done is given by:

However, in general the force (F) is not constant over the distance x, thus we need to sum all the incremental work processes taking into consideration the variation of the force (F). This leads to the equivalent integral form for determining work done (W) as follows:

A Units Survival Kit for US Students 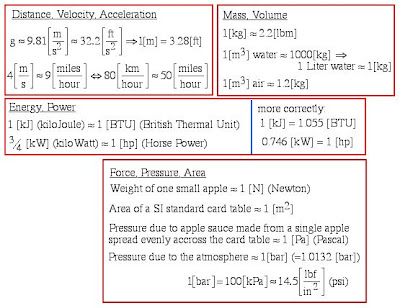