In a two-stroke engine the camshaft is geared so that it rotates at the same speed as the crankshaft (1:1). The following section will describe a two-stroke, supercharged, diesel engine having intake ports and exhaust valves with a 3.5-inch bore and 4-inch stroke with a 16:1 compression ratio, as it passes through one complete cycle. We will start on the exhaust stroke. All the timing marks given are generic and will vary from engine to engine.

Exhaust and Intake
At 82° ATDC, with the piston near the end of its power stroke, the exhaust cam begins to lift the exhaust valves follower. The valve lash is taken up, and 9° later (91° ATDC), the rocker arm forces the exhaust valve off its seat. The exhaust gasses start to escape into the exhaust manifold, as shown in Figure 21. Cylinder pressure starts to decrease.

After the piston travels three-quarters of its (down) stroke, or 132° ATDC of crankshaft rotation, the piston starts to uncover the inlet ports. As the exhaust valve is still open, the uncovering of the inlet ports lets the compressed fresh air enter the cylinder and helps cool the cylinder and scavenge the cylinder of the remaining exhaust gasses (Figure 22).Commonly, intake and exhaust occur over approximately 96° of crankshaft rotation. 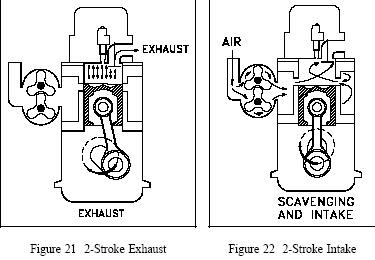 Compression
After the exhaust valve is on its seat (53° ATDC), the temperature and pressure begin to rise in nearly the same fashion as in the four-stroke engine. Figure 23 illustrates the compression in a 2-stroke engine. At 23° BTDC the injector cam begins to lift the
injector follower and pushrod. Fuel injection continues until 6° BTDC (17 total degrees of injection), as illustrated in Figure 24. 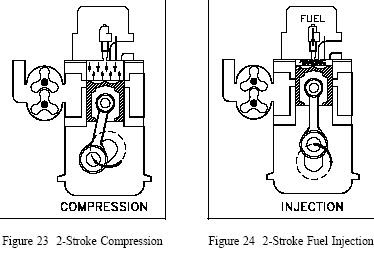 Power
The power stroke starts after the piston passes TDC. Figure 25 illustrates the power stroke which continues until the piston reaches 91° ATDC, at which point the
exhaust valves start to open and a new cycle begins. 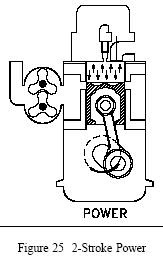